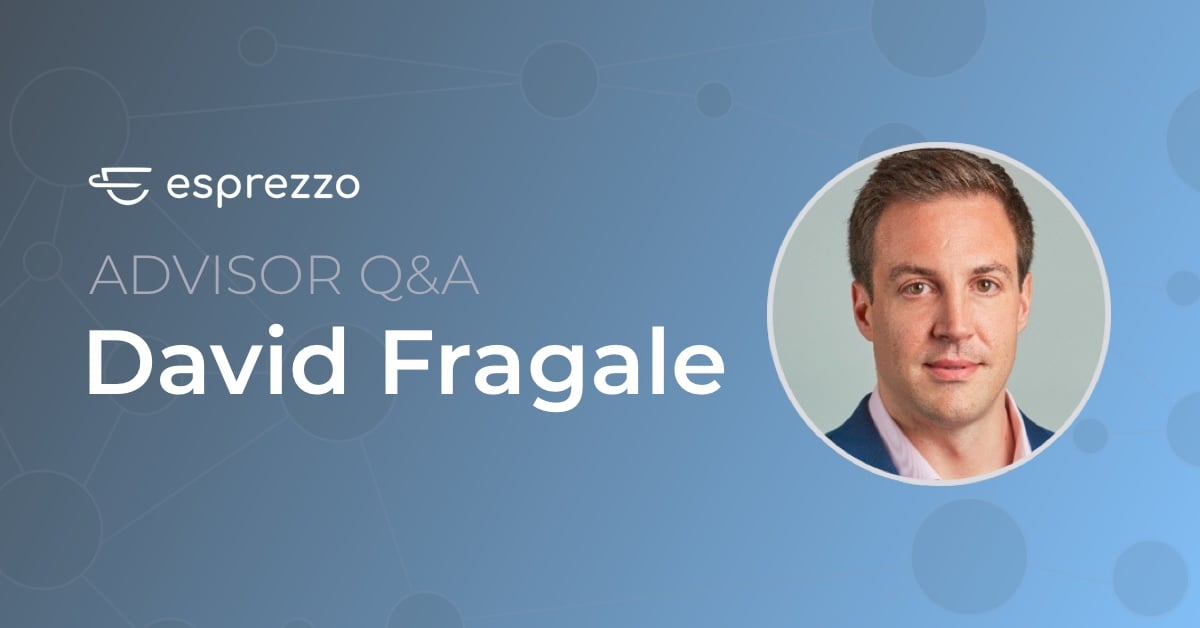 We're excited to introduce you to Esprezzo Advisor David Fragale. David is Chief Operating Officer at Arwen, a non-custodial trading protocol adding security to trading on cryptocurrency exchanges. Having led projects at PricewaterhouseCoopers (PwC) for Fortune 500 companies, worked with the U.S. Treasury and being appointed as an MIT Sloan Fellow in Innovation and Global Leadership, David has extensive insights from experience in the areas of finance, fin-tech, cryptocurrencies and blockchain. At original publishing, David was the Co-Founder and Chief Product Officer at Atonomi.

Read on to learn more about David’s journey and how he thinks blockchain can solve real world problems.

When and how did you first become interested in blockchain technology?

I first heard about Bitcoin in the now famous Wired article titled, ‘The Rise and Fall of Bitcoin’ in November 2011. I immediately brushed it off as silly internet money because it reminded me of the online video game digital currency in Second Life. It wasn’t until I was at MIT in 2014 that I came across blockchain the technology and saw all the potential it offers.

What were some of the biggest learnings from your time at PwC working on blockchain technology?

I was very fortunate to work on some interesting blockchain projects while at PwC. Around 2015/2016 not many folks within PwC, or industry for that matter, understood the technology and its potential impact. I figured no one knows ledgers better than PwC, so it was only a matter of time before it caught on. For two years, I was able to help build significant blockchain work in areas I like to call “blockchain for good” and the “dark side of crypto”.

On the “blockchain for good” side, I helped to build arguably the first humanitarian aid and international development blockchain platform called Cryptoconomy. For the “dark side”, I led a project that involved helping the U.S. Government assess the degree of national security risk associated with cryptocurrencies.

A key takeaway from this experience was that big institutions are very slow to understand and adopt emerging technology such as blockchain. Winners will likely be determined in the coming years, and the early experimenters are in the best position to succeed if indeed blockchain is as pervasive as expected.

Tell us about your vision behind Atonomi, the company you co-founded focused on blockchain-based security protocol for IoT devices.

For most of my career I’ve built resilient enterprises through solutions focused around risk management. Much of today’s organization — and society at large — involves data and thus a need for more data security. Atonomi was the perfect opportunity for me to address the alarming cybersecurity issue associated with the growth of IoT. It is amazing when you realize there are about 8 billion connected devices today and small sensors like thermostats are being targeted and successfully hacked leading to massive data breaches.

When you factor in the fact that 5 million new connected devices are estimated by Gartner to be coming online each day, that means in the next few years we’ll have around 50B connected devices. If we cannot secure the data today, how will we ever secure 50 billion?

To me, blockchain with its decentralized architecture, immutable ledger and economic incentive had to offer a potential solution here. In fact, blockchain really is a gift to cybersecurity in that it can decentralize and reduce attack vectors, it can track a device’s behavior using the ledger and it can realign behaviors in an ecosystem through tokenization. I am really excited about the future of blockchain in the cybersecurity space. To take my vision one step further, I imagine a world where an individual can truly own and control their data, including the data exhaust given off by our future IoT devices.

How would you describe your journey and experience within the blockchain and crypto communities?

I had a once in a lifetime opportunity in 2008 to be a part of a team that came together to build the U.S. Treasury’s Troubled Asset Relief program (TARP), the $700B emergency stabilization fund in response to 2008 financial crisis. I figured that it was extremely rare to be involved in something of such historic significance. The last three years have felt eerily familiar to me in the heightened sense of importance each day. The same level of excitement and dedication is there in the crypto space. The opportunity is here to build a new financial system that doesn’t rely upon trust, which is one of the key reasons we experienced the 2008 financial crisis. That is a lot of reason to get out of bed excited each morning!

Which industries do you believe will be impacted the most or reap the greatest benefits from blockchain technology?

The developing world will benefit the most. When you consider the fact that out of the 7B people on earth, 1.1B do not have a legal identity and 2.5B have never been into a bank it is obvious blockchain can offer value immediately to those in need. End user incentives are important for adoption to take place at scale.

What new business models do you see blockchain technology enabling?

I really like business models that reward an ecosystem through token rewards. Projects like Golem are great examples of how we can make better use of excess capacity in this world through tokenization. Realigning behavior through incentives is a powerful tool that needs to continue to be explored. Look at what Bitcoin did by enabling an economic incentive to be awarded to miners for dedicating their computing power to maintain the ledger. I think we are just scratching the surface of opportunity here.

What are some of the barriers you’re seeing for large-scale adoption of blockchain technology?

Regulatory uncertainty and lack of custody solutions are top of mind. User interface and key management issues must be addressed before mass adoption. One of the biggest barriers in the U.S. is the degree to which an incumbent is entrenched in a given market. For instance, the big banks and payment companies are not just going to get up and walk away from the billions in revenue earned from the existing payment system. They will likely lobby Congress hard before letting change happen. Look to overseas markets for early adoption at scale. I’d love to be proven wrong here, but that is how I see it.

What about Esprezzo encouraged you to join as an advisor?

I am a big believer in the problem Esprezzo is solving. The talent gap in the blockchain space is real and Esprezzo offers a unique solution to bridge this gap.

Where do you see Esprezzo making the greatest impact?

It is just a matter of time before the enterprise market catches on to Esprezzo. For an enterprise to use the Esprezzo suite without the need for hiring up or building a full blockchain team is a compelling value proposition.