While working on the Esprezzo platform and rapid application development tools for building blockchain-integrated apps, we saw an opportunity to provide developers a performant, cost-efficient, egalitarian blockchain and smart contract platform to build and test on — one that’s less congested and focused on fostering development rather than a speculative trading instrument. And so, we built Perkle: a mineable Proof-of-Work, fairly released Ethereum-compatible blockchain and smart contract platform.

Perkle is a fork of Go Ethereum which will make life easier for developers by providing a seamless transition of code and libraries developed on Perkle to the Ethereum Mainnet or any other Ethereum-compatible network. Mining generates PRKL, which can be used to pay gas fees for transactions and smart contract initialization.

Adding Perkle to the Esprezzo ecosystem means we can provide a complete solution for developers and businesses getting started with building blockchain-integrated apps.

Our API and SDKs will provide developers the ability to integrate data and functionality from Perkle (and in the future, other Esprezzo-supported blockchains) with other applications.

Update: since publishing this blog post, we launched a block explorer for exploring activity on the network, checking your PRKL balances and transactions, etc.

If you’re interested in mining Perkle, check out the official Esprezzo mining pool.

If you prefer to use MyEtherWallet check out our guide on how to use Perkle with MEW.

You might be interested in Dispatch, a tool we're working on that makes it super fast and easy to create blockchain-based notifications and automations.

We’re excited to showcase some of the first technology built using Esprezzo’s toolkit with PerkleBot for Discord. PerkleBot is a blockchain intelligence bot that not only helps answer frequently asked questions, but can also perform blockchain-related activities. For example, PerkleBot can query network stats, check wallet balances, or even create a Perkle wallet and send PRKL to other users. At the time of publishing, here is what you can view and do using PerkleBot in Discord: 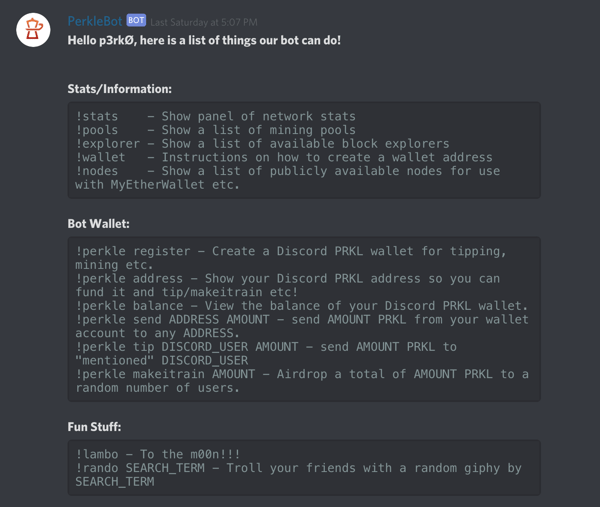 Here’s an example of the network stats PerkleBot returns:

On that note, please join us on Discord! We welcome people interested in blockchain development to join our community.

Consider checking out our block explorer, which makes it easy to explore transactions and activity on Perkle and, in the future, other Esprezzo-supported blockchains. If you want to know more about the block explorer, we wrote a post about it.

We’re building and testing the Esprezzo platform and tools using Perkle; if you're interested in experimenting with blockchain-based automation and testing on Perkle, check out Dispatch!

Make sure to subscribe to email updates to stay up to date on Perkle, Esprezzo dev tools, and join our community on Discord.