Last week we visited Portsmouth, New Hampshire for the Free State Blockchain Digital Assets Conference, which brought together blockchain and crypto enthusiasts from industries including finance, education, e-commerce and energy to discuss and debate the opportunities and challenges that lie ahead for tokenized assets. Here’s a recap of Day 1.

After opening remarks by host Bruce Fenton, Founder & CEO of Chainstone Labs, co-founder of the Bitcoin Association and board member of the Bitcoin Foundation, Jeffrey Tucker from the American Institute for Economic Research took the stage to deliver the opening keynote. Tucker addressed the seemingly slow adoption rate of crypto payments and the current bear market by highlighting that acceptance and adoption always take time no matter how pragmatic the solution may be. He poked fun at himself for writing a book (It’s a Jetson’s World) about miraculous advances in technology in 2011 that neglected to mention Bitcoin, though he’d heard of it from colleagues at the time. Today, Tucker emphasizes digital assets’ ability to eliminate ambiguity around ownership claims while simultaneously providing a technology, based on social consensus, which allows the community to expand and grow wealth.

Paul Snow of Factom, a company built to facilitate the ownership of identify and in turn, the attributes that make people unique, drove home three key points regarding identity:

While the government and large corporations such as Facebook or Bank of America can help us establish an identity, at the end of the day, they control the data attributes of your identity, which can easily be lost or worse, stolen. Thanks to blockchain technology, we can start creating systems where private key holders truly own and control their identity and can grant access of certain “identity attributes” to approved organizations as needed.

So what’s changed? The panel noted that with attention comes scrutiny and regulation, though most panelists’ friends and family no longer laugh when learning they work in the blockchain universe. And while a shift has occurred within enthusiast circles from general promotion to niche and specific applications, a massive disconnect remains between what’s promised and what’s being actually delivered. One thing the panel unanimously disliked is the emergence of blockchain “experts” who may have good intentions but are often uninformed, spewing buzzword soup, thus exacerbating the disconnect between hype and reality. However, all participants were quick to admit, given the exponential growth within the crypto industry, much of the hype is unavoidable and gives way to a much larger overall positive impact .

Shawn Owen of blockchain-backed loan company Salt Lending predicted that the next wave of crypto technology will see securities transformed and logged on the blockchain providing business owners the infrastructure to easily raise money, dilute assets and leverage their current assets to generate liquidity in traditional markets. But we have a ways to go. According to Shawn, the individuals who are currently tokenizing are doing it correctly in the sense that they’re keeping multiple books and following regulations to the best of their ability. But until government watchdogs provide clarity, large institutional investments will remain few and far between.

Overstock.com Chairman Jonathan Johnson spoke next. Overstock.com was the first major retailer to accept Bitcoin payments back in 2014. Now, crypto purchases account for $50k — $100K of weekly revenue on the e-commerce platform and Johnson believes this number will only increase in the years to come. However, reaching mass adoption requires overcoming current shortcomings in decentralization, accessibility and security. A piece of that puzzle may be Bitsy, a biometric wallet that provides an easy and secure way to recover and deploy crypto funds. Bitsy was acquired by Overstock.com in September.

The day closed with a panel discussion focused on adoption of cryptocurrencies by the New Hampshire community. Chris Reitmann (Bitcoin Embassy New Hampshire), Darryl Perry (Liberty Lobby), Derrick Freeman (Free State Bitcoin Shoppe) and Ian Freeman (Free Talk Live) attributed the state’s adoption to the activists who lobby for the cause and the unique opportunity presented by the state of New Hampshire. Freeman noted that New Hampshire is a state of only 1.35 million people. Both Portsmouth and Keene, two cities that have the highest crypto adoption levels[JL8] , are home to approximately 30k people each and as a result, a few enthusiastic early adopters can have a very large impact. Perry highlighted how easy it was to get the community involved in pushing for legislation to protect early crypto adopters, which included customers wanting to pay for goods and services using crypto, and the businesses accepting crypto.

With the official state motto being “Live Free or Die”, New Hampshire served as a natural setting for the conference, and Portsmouth in particular is becoming a destination for crypto enthusiasts from around the world given the high rate of crypto adoption by consumers and businesses thanks in no small part to the efforts of Free State Bitcoin, Chainstone Labs and other local organizations.

In the greater Portsmouth area alone you’ll find more than 20 businesses accepting cryptocurrencies including restaurants, clothing stores, bars, yoga studios, a hair salon and even a law office. Patrons can leave cash behind and instead opt to pay with Bitcoin, Litecoin, Dash, Monero or Zcash.

This past summer the AutoFair dealership in Merrimack, NH started accepting cryptocurrency Dash as a form of payment. Soon after, a 2012 Ford Fusion was sold for $8,316, amounting to a payment of 40.68405 Dash, paid in full up front. A local yoga studio used all the class fees paid in crypto to fund a studio renovation. Thanks to use cases such as these it’s easy to understand why the number of businesses accepting crypto in New Hampshire is at over 100 and growing.

It was a treat to experience such a crypto-friendly city and get to know more of the community. We look forward to seeing crypto and blockchain technology adoption continue to grow around the world. 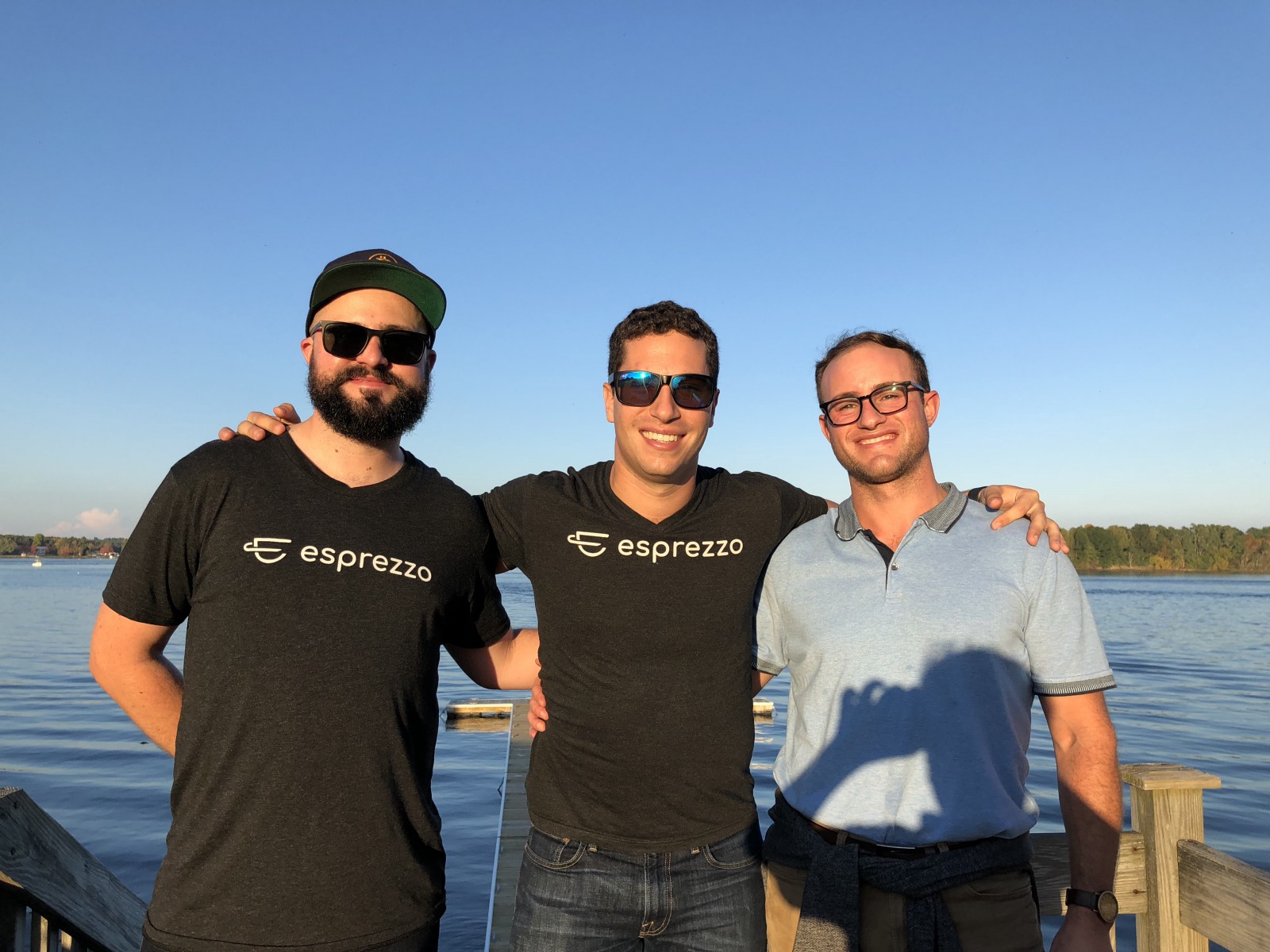 The Esprezzo team enjoying a lovely autumn day in Portsmouth