The Front Line of Blockchain Development

How do developers view blockchains and what obstacles do they face? This is a question we continuously examine through conversations with developers and business owners, as well as by consuming articles, studies, and reports. One paper we came across recently, titled Blockchain in the Eyes of Developers, was an analysis of over 10 years of questions and answers at the cross section of software development and blockchain from Stack Overflow.

While many studies and reports focus on real-world applications of blockchain technologies very few reveal the concerns of developers who are responsible for integrating this game-changing technology into our everyday lives. The authors of this paper sought to discover blockchain-related trends and topics among developers. We’ve summarized their findings below.

In Blockchain in the Eyes of Developers, He Jiang, Dong Liu, Zhilei Ren and Tao Zhang exported all 15,483,377 questions posted to Stack Overflow between July 2008 and March 2018 and extracted posts containing the string “blockchain” and “block[^a-z]chain” in the post headings, bodies or tags. In case you’re not familiar with regular expressions, “[^a-z]” matches non-letter characters, so “blockchain”, for example, would be included. This returned 1,785 blockchain-related question posts, or 0.0115% of all Stack Exchange posts during the almost 10 year period (the earliest blockchain-related question was posted in 2012).

From there, the team manually analyzed the 1,785 posts to answer the following questions:

Number of blockchain-related posts on Stack Overflow over time 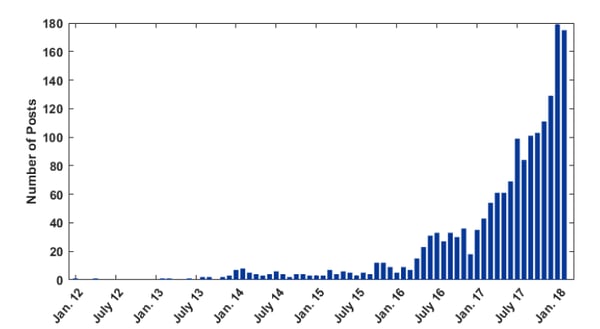 Source: "Blockchain in the Eyes of Developers" report

From 1,785 blockchain-related Stack Overflow posts, the team identified 13 categories of questions. The most popular questions related to Configuration, Deployment, Contracts, Protocol, and general Discussion, which accounted for more than 60% of all blockchain-related posts.

Questions of Configuration are about how to configure the dev environment to work properly. Many Stack Overflow contributors reported errors during the configuration process, such as: Error Running custom blockchain (hyperledger) application with security enabled. Similar to Configuration, Deployment questions focused on how to set up or install the blockchain system. An example of this being, “How can I integrate an Ethereum wallet on my site?”

Most questions regarding the business logics of blockchain were found in the Contract category. Posts regarding the development, performance and implementation of smart contracts were very common. An example of this being, “How do I exchange tokens/coins within a smart contract?” In general, questions of Protocol revolved around the operating mechanisms of blockchain, the underlying logics, and the correct protocols to make blockchain work properly. Consensus determining questions existed here, for example.

Questions in the Discussion category tended to be more general and open-ended; contributors wanted to talk about an idea (e.g., “Are there already other practical uses for blockchain?”), better understand the mechanisms (e.g., “Where are the chain codes executed?”), resolve puzzles (e.g., “Bitcoin transactions, how might someone resolve balance discrepancies?”), or verify their thoughts (e.g., “Is blockchain a decentralized database?”) 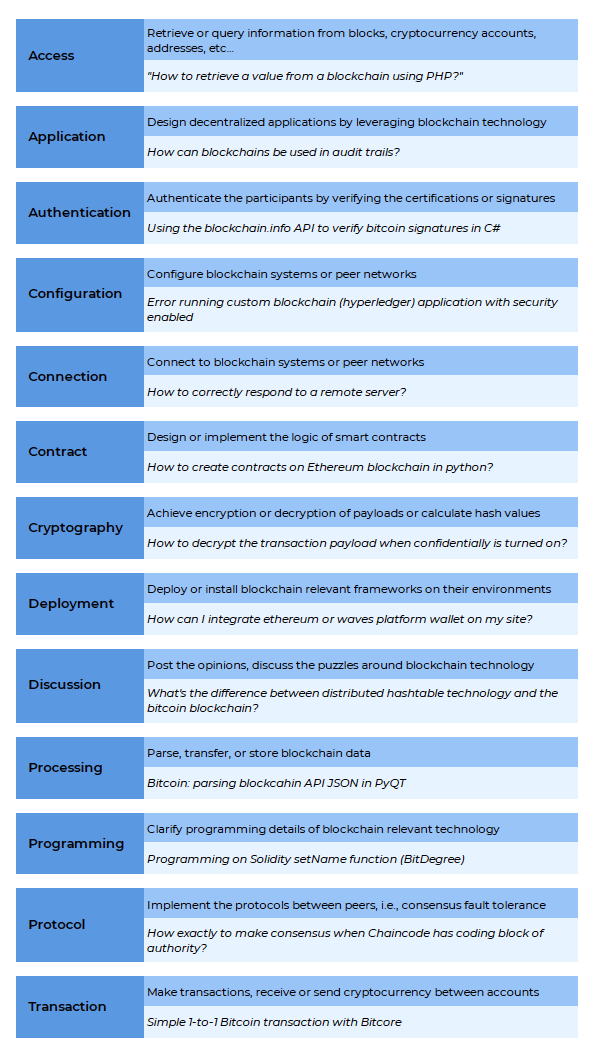 The authors of Blockchain in the Eyes of Developers conclude that most developers who posted questions in Stack Overflow were just starting to explore and build on the blockchain. Furthermore, according to a survey by Evans Data Corporation, there are over 21 million developers world-wide. Different sources estimate that only 5,000 to 25,000 of those programmers have the skills necessary to leverage blockchain technology. That’s less than 2% globally. Inversely, there are 14 job openings for every qualified blockchain developer! Thanks to the boom in blockchain projects and corporate demand of the newly formed blockchain divisions in virtually every large company, there simply aren’t enough qualified developers to go around.

In 2018 much of the blockchain-related discussion revolved around the crypto bear market, uncertainty regarding ever-evolving governmental regulations and the speculative value of cryptocurrencies. As entertaining and dramatic as these conversations were, in 2019 we’re staying focused on blockchain developers and providing them with proper tooling and a robust environment for building products and applications. Mainstream adoption is coming, as evidenced by proof of concepts we’re seeing by tech giants including IBM and Oracle for clients that include Walmart and Kroger.

We recognize and have experienced the barriers faced by developers who are interested in blockchain technology but may not have time or resources to learn and implement performant solutions, which is why we started Esprezzo: to help developers and organizations grow their next generation businesses by simplifying the creation and management of applications that leverage blockchain technology.

What are you trying to build? What obstacles have you come across and how can we help? Leave a comment and let us know!