As we continue to prepare our smart contract integration product suite for beta testing and follow developments in the blockchain space, it’s becoming increasingly clear how important interoperability and token portability is going to be. That’s why we created XPZ, an experiment in building a sustainable and extensible cross-chain programmable asset.

At Esprezzo we are building an ecosystem of tools and services to help developers more easily integrate smart contracts and blockchain services into new and existing applications. This includes a library of smart contracts that are easy to configure and deploy via our SaaS platform and require no working knowledge of smart contract development.

Our goal is to extend our libraries and APIs to serve as many types of clients and projects as possible. We want to offer a platform that enables all levels of developers to bring blockchain products to market efficiently and in a forward-thinking, sustainable manner.

Much of our smart contract work requires a digital asset that is purely smart contract based and provides abilities that do not fit well into "layer 1" or "gas" token such as PRKL, and is not native to, and stuck on its "own blockchain".

While the Perkle blockchain is the core, first layer platform we are developing on and deploying to, we want to extend our second layer tools and services across additional networks to provide the greatest flexibility and choice for developers. By being purely smart-contract based, XPZ serves a distinctly different (cross-chain) purpose than PRKL, a token native to the Perkle blockchain. Token portability means XPZ won’t be forever tied to the blockchain on which it originated (Perkle), increasing its utility.

Currently, XPZ only exists on the Perkle blockchain and can only be obtained using Perkle. Later this year XPZ will be "bridged" to Ethereum mainnet, so that XPZ can be transferred from Perkle to Ethereum and vice versa. In the future XPZ should have the ability to integrate with services on any blockchain or programmable network that we see value in supporting and we will continue to explore emerging networks and protocols. The decision to integrate with or deploy on new networks will be based on user demand, goal alignment and technical feasibility.

XPZ is an exercise in cross-chain interoperability and middleware bridge technology; our first priority remains getting our smart contract integration tools ready for beta testing. Releasing XPZ is providing valuable feedback, with our community helping test this contract that will eventually be added to our growing smart contract library.

We have been seeing strong demand for our tools across various verticals including healthcare, financial services and nonprofits. If you are working on a project and interested in utilizing Esprezzo’s smart contract templates, API, SDKs or bridge technology please reach out to learn more about our pilot program.

Possible use cases for XPZ:

Our goal is to reach but not exceed a 1.5 Billion XPZ emission by the end of 2020 using a combination of:

We're exploring the idea of using PRKL in the development of "base token" staking/emission contracts as well.

Where does the incoming PRKL go?

PRKL sent to the XPZ minting contract address will be deposited into a timed release contract at 100k per quarter (3 months) until it is gone.

PRKL will be used for:

We're exploring the idea of using PRKL in the development of "base token" staking/emission contracts as well.

You must have PRKL to get XPZ. If you are a member of our Discord server and have a Discord wallet set up, the easiest way to get XPZ is to use PerkleBot, our Discord Bot.

You will receive 100 XPZ per 1 PRKL sent to the contract address, and as PRKL has 18 decimals, you can send fractional amounts of PRKL for testing purposes.

To send 0.5 PRKL to the XPZ contract address, type the following into Discord:

Replace "0.5" with the quantity you wish to send.

To check the balance of XPZ in your Discord wallet, type the following into Discord:

PerkleBot will display your current balance of XPZ in a private message.

For security, you may want to transfer your XPZ to MyEtherWallet (MEW) instead of keeping it in your Discord wallet.

As XPZ sits on top of Perkle, you’ll need to connect MEW to Perkle. Make sure you set the correct port and chain ID!

After you’ve connected to Perkle, you should see the following in the Network box:

Now to add XPZ, click “+ Custom Tokens” in the Tokens box underneath the Network box: 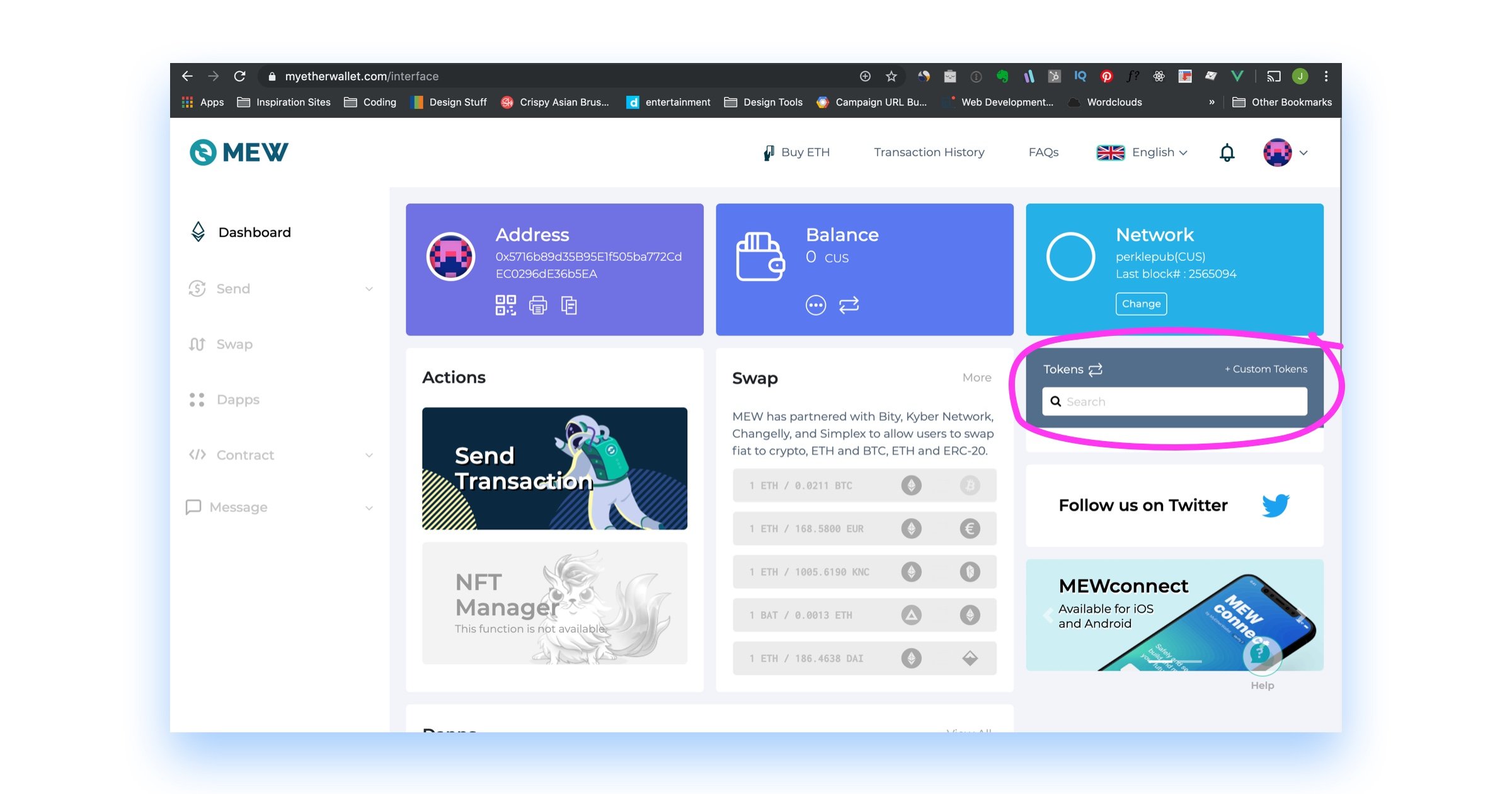 You should see this pop-up: 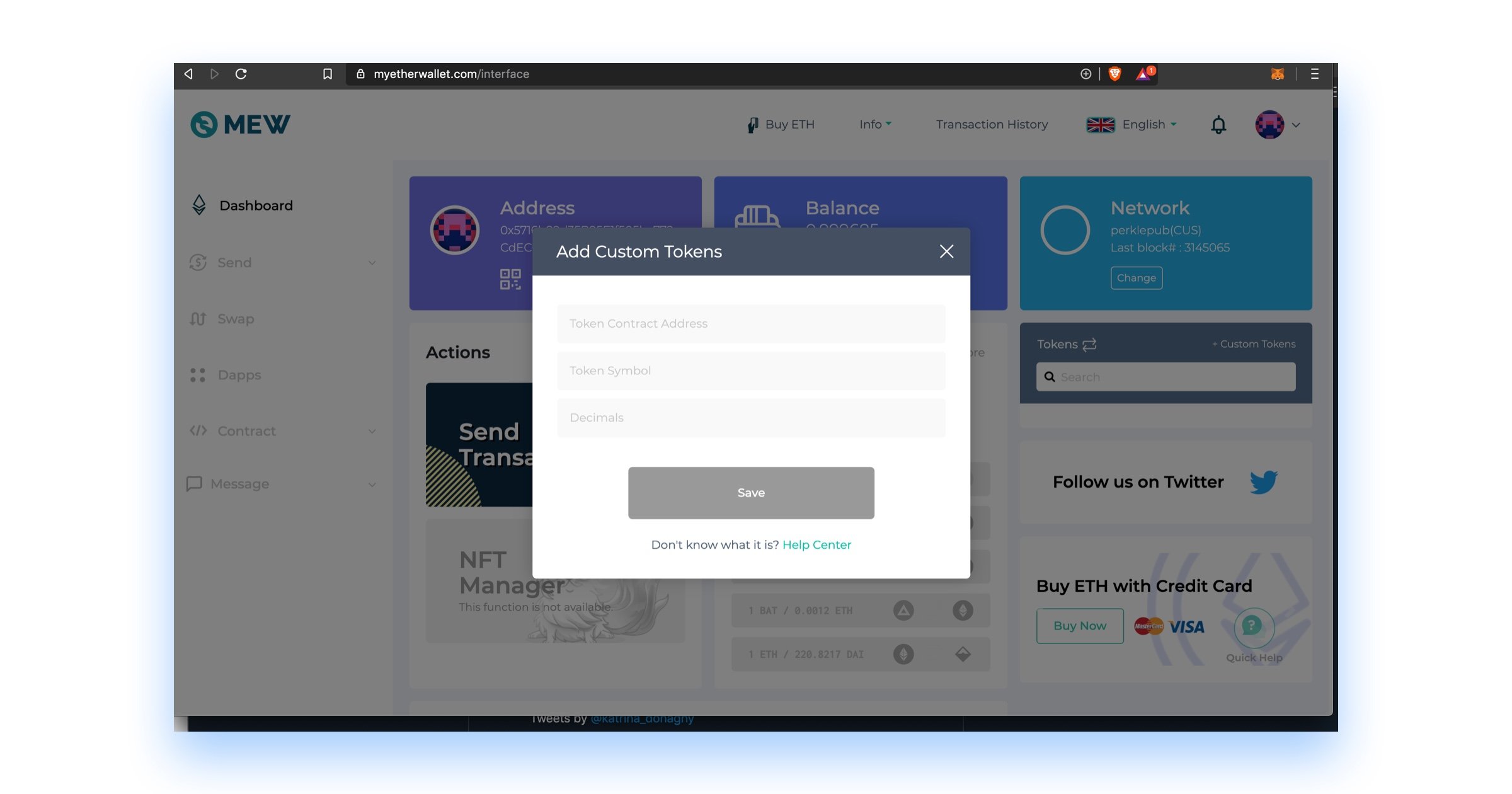 Fill in the fields as follows: 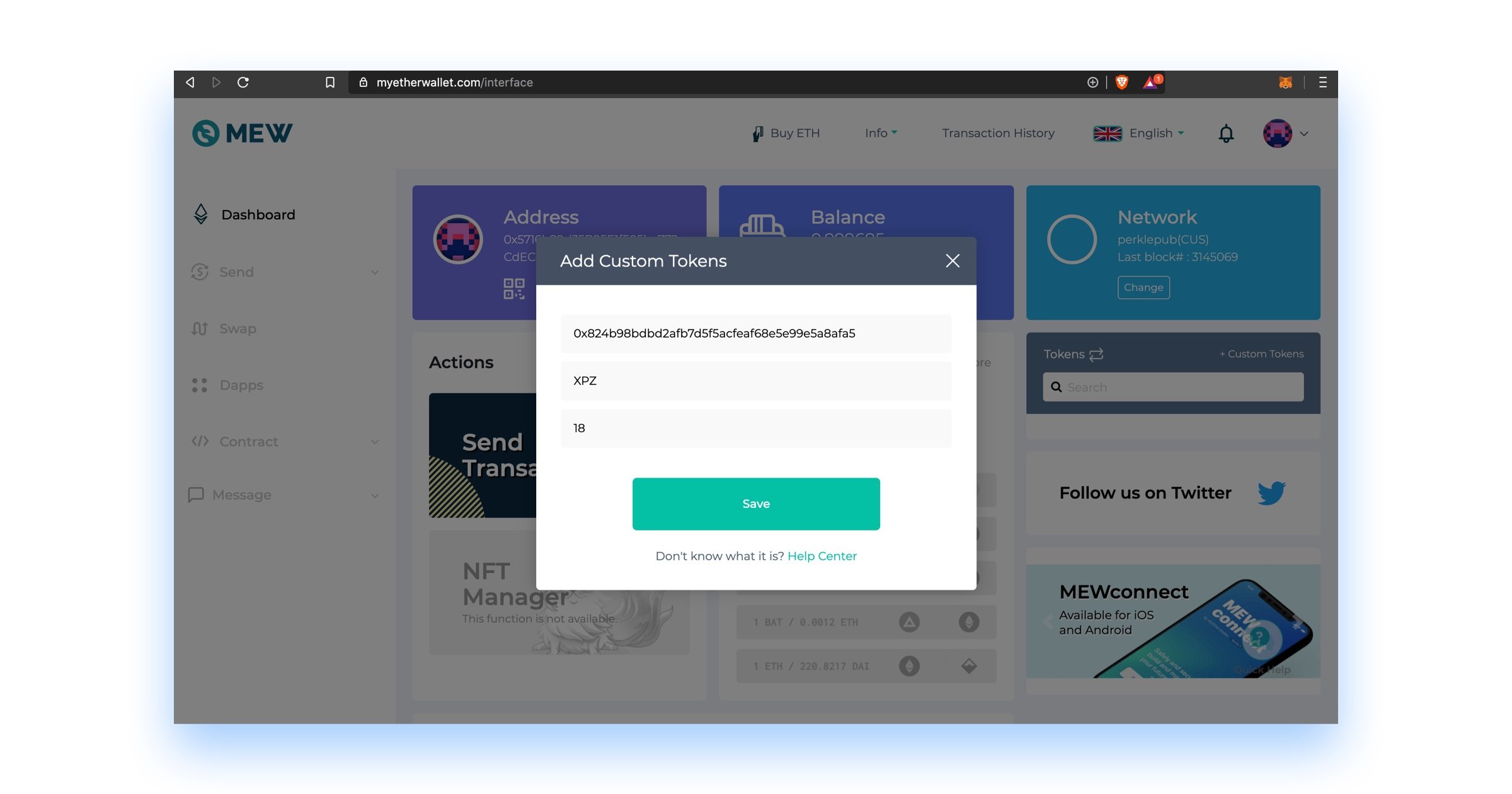 Click Save. You should now see XPZ listed in the Tokens box with a balance of 0. Here is what mine looks like after we sent 1 XPZ to MEW. We’ll go through how to do that next. 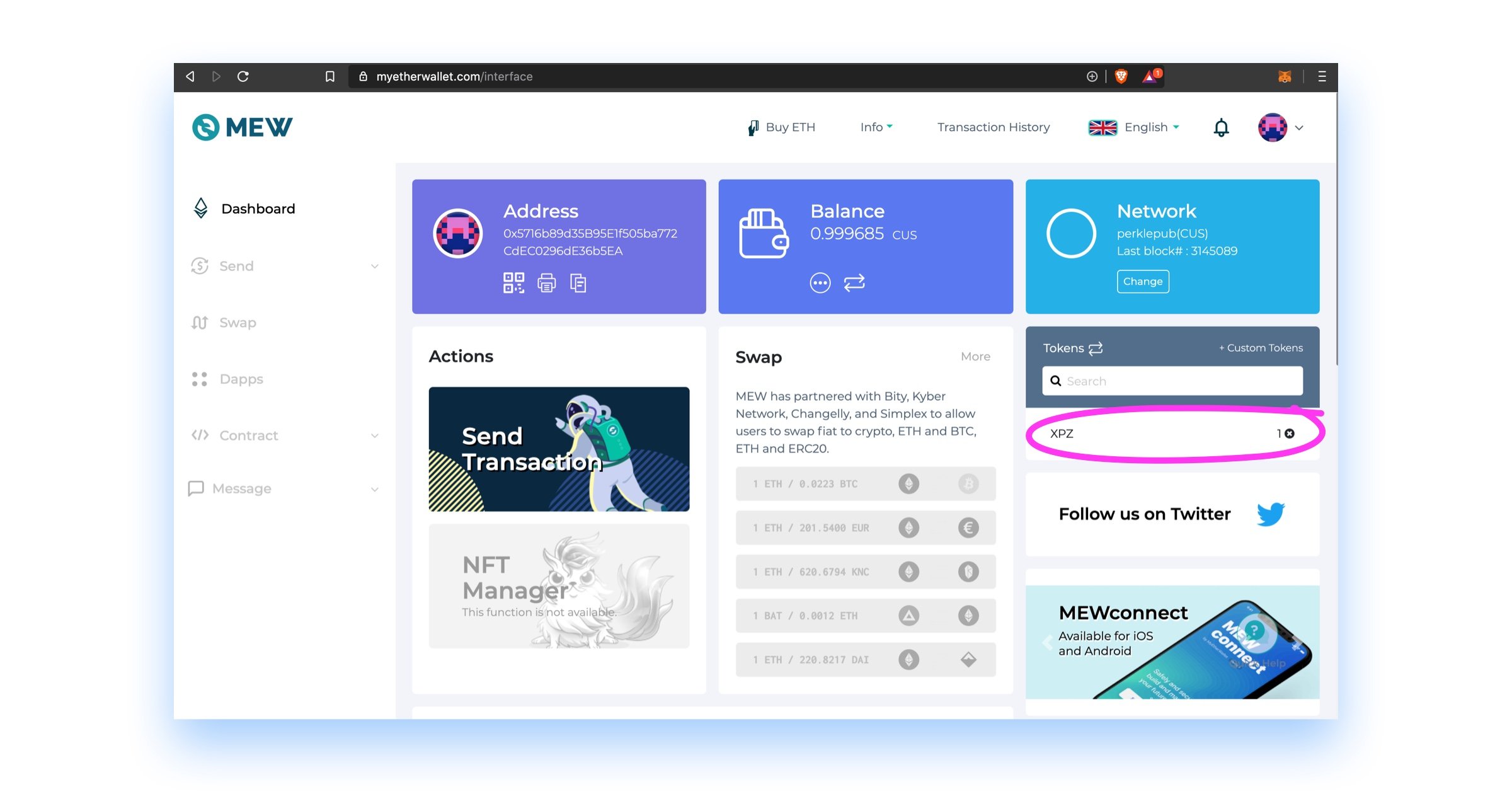 To transfer XPZ from your Discord wallet to MEW, copy the address from the Address box in MEW: 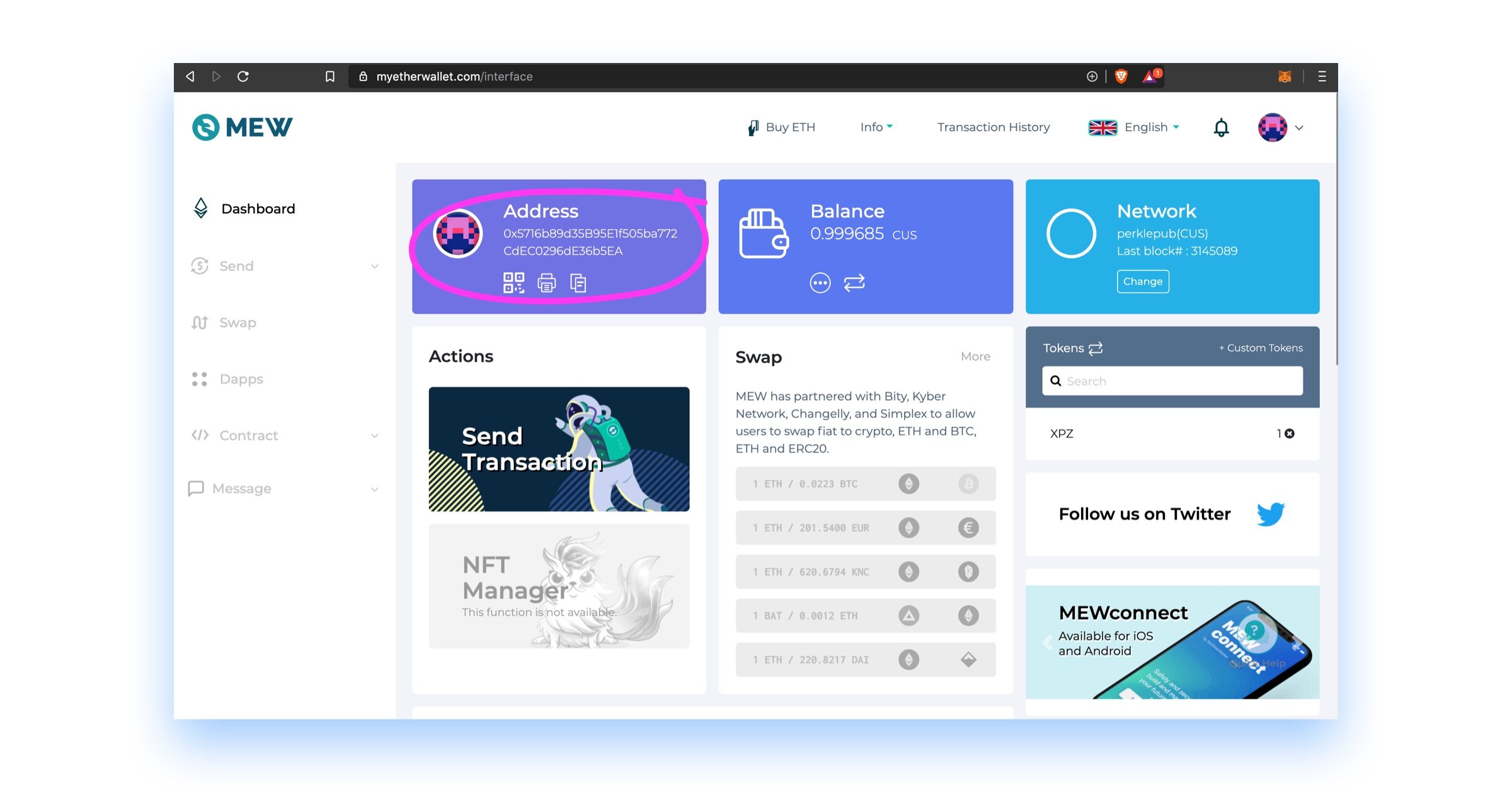 You’ll be pasting your address in a PerkleBot command on Discord:

!token transfer <your MEW address> <number of XPZ you wish to transfer> xpz

In the example below, the user is sending 1 XPZ from their Discord wallet to MEW:

You’ll see a private message from PerkleBot in Discord:

To view your XPZ balance on MEW you may need to click the refresh button in the Tokens section: 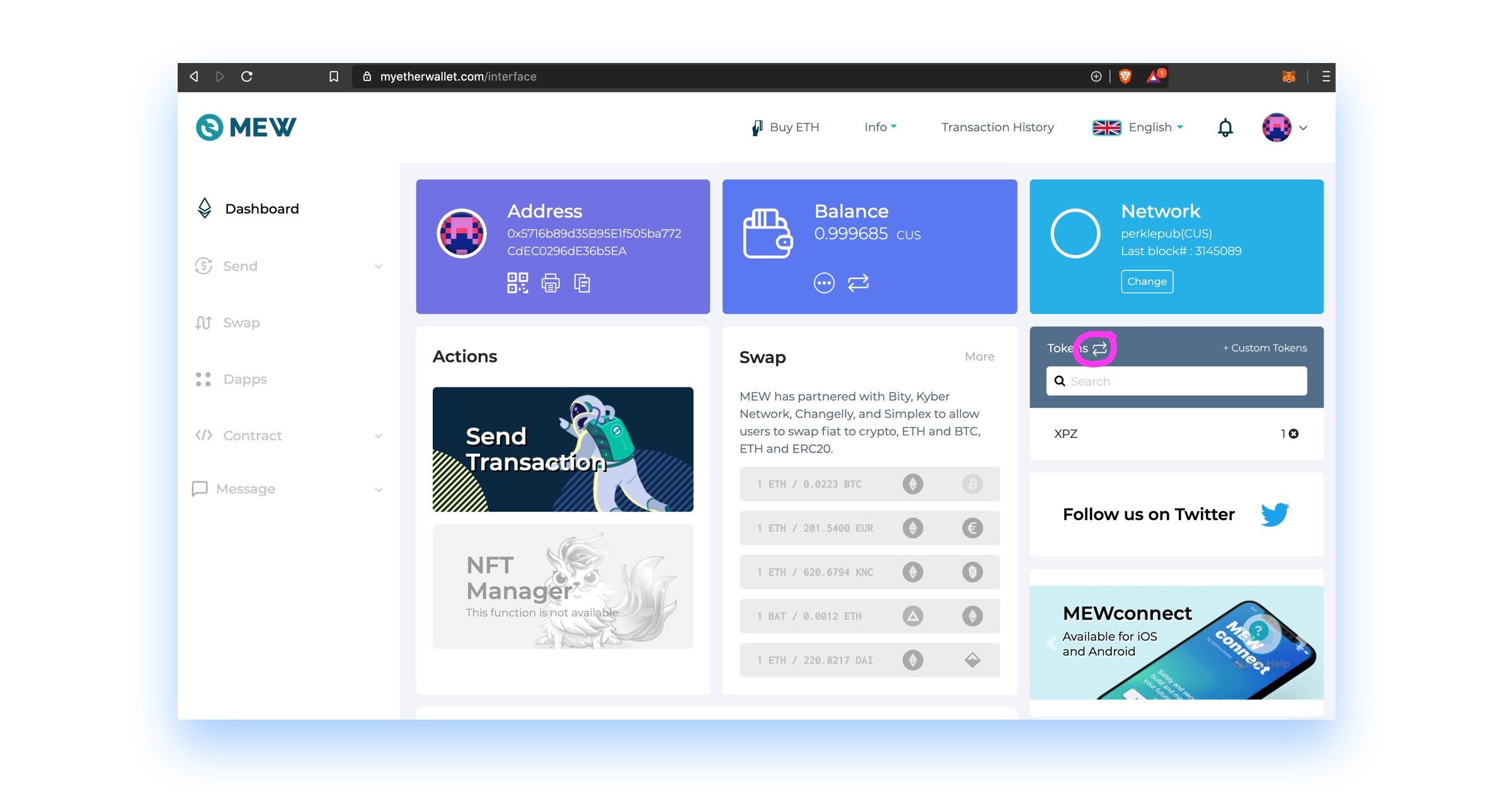 Have questions or feedback? Need help or just want to chat with the team and other community members? Join us on Discord!

You might be interested in Dispatch, a tool we're working on that makes it super easy and fast to create blockchain-based notifications and automations.